In 1998 Al Enzweiler started conducting the seminar Benchmarking World Class Systems to market Enzweiler’s Architecture Team Methodology. Each seminar started with Al Enzweiler explaining how data on contributions which could be consistently made to hitting top line targets on Income Statements by managing to use; Targets Systems, synchronized databases, and databases, could be used to benchmark Target Systems against artificial intelligence, business intelligence, machine learning, digital transformation, and other terms coined and used by IT suppliers and their ecosystem partners for using databases.

Most of the terms coined and used by IT suppliers and their ecosystem partners for using databases which were benchmarked against Targets Systems in the Digital Age of 2001 are still being used in 2023, exceptions are;

In 1998 when the Computer Channel published educational videos featuring Al Enzweiler marketing the 1998 version of Enzweiler’s Architecture Team Methodology, included with the video was a white paper published by Herb Edelstein a Principal at Two Crows Consulting on Data Mining.

In 2023 databases are still being maintained using; Customer Relationship Management (CRM) Systems, Enterprise Resource Planning (ERP) Systems, Human Capital Management Systems, State-of-the-Art Financial Systems, and other systems which could be architected by members of an Architecture Team using their organization chart(s) to be developed, to be used to maintain databases, to be used by managers to hit metric targets for managing their responsibilities.

Executive Education business units of universities used direct mail campaigns to market Al Enzweiler conducting the seminar Benchmarking World Class System seminars. In the early 2000s, Al Enzweiler decided to use http://Enzweiler.com to digitally market Enzweiler’s Architecture Team Methodology and to stop flying around the United States and Canada conducting seminars. Below is a copy of the direct mail piece used by Pacific Lutheran University to market one of the last Benchmarking World Class System seminars conducted by Al Enzweiler. 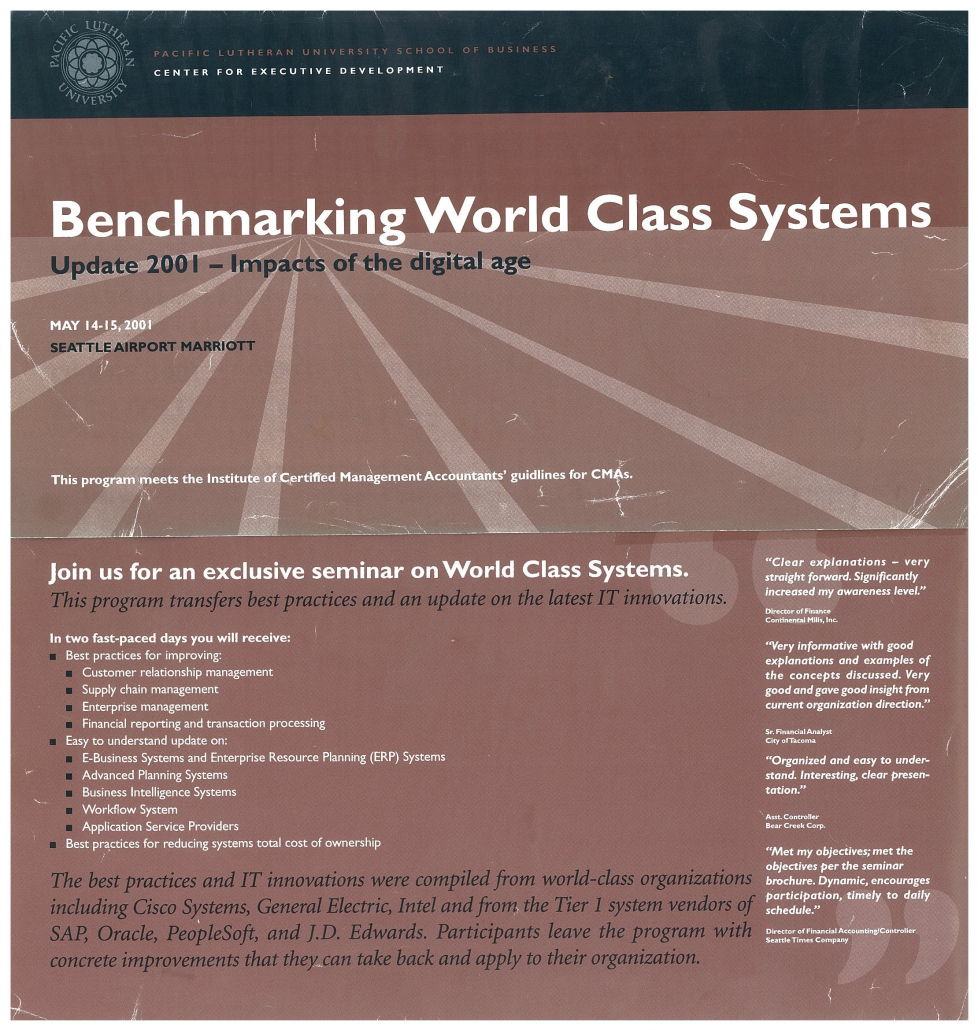 QuestionsOn the Beach
Scroll to top